This is Scientific American — 60-Second Science. I'm Christopher Intagliata.
Satellite imagery, like Google Earth, makes it easy for ecologists halfway around the world to check up on tropical forests — see illegal roads and logging, stuff like that. But the info is limited.
"Satellite data often tells you what happens after it's happened." Rhett Butler, the founder of Mongabay. com, that's an environmental science news website. In a perspective piece in the journal Science, he and his colleagues write that sound recordings could supplement satellite data, as another conservation tool.
"You can actually set up alerts. So you can hear things like chainsaws or gunshots in real time. So you can get out ahead of potential deforestation before it occurs."
Small audio recorders, some of which are solar-powered and hooked to cellphone grids for data upload, also give ecologists the ability to eavesdrop on a jungle's biodiversity over time: "If you're in a primary forest, you'll tend to see all the frequencies of the soundscape occupied by different species. (intact forest clip up and under) These are insects, birds, calling mammals, frogs, things like that." 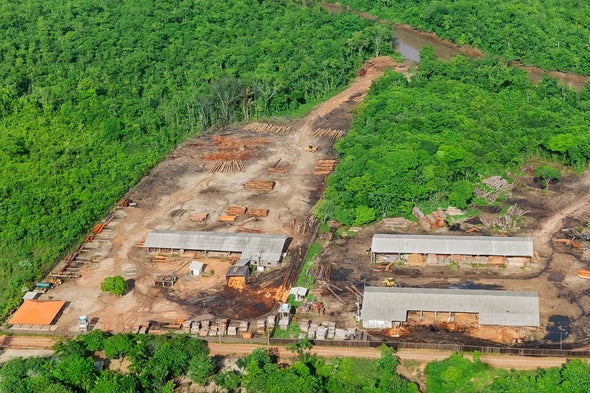 As a comparison, here's a forest plot after selective logging — meaning some trees were cut, others left standing. "As you move into a more disturbed ecosystem, you'd start to see more gaps across the frequencies of that soundscape." Certain insects dominate. And the diversity of calls declines as disturbance increases.
And while the human ear is perceptive, algorithms are a much more powerful tool to comb through thousands of hours of data, to get a richer picture of changing tropical biodiversity. "And so that's where you get scalability, if you can create signatures for certain species or animal groups and then run an algorithm that matches those patterns against all the sound data."
Nowadays, many industries — like cattle farming, palm oil, soybean and paper production — are committing to zero deforestation goals, which can be hard to measure. But by coupling satellite data and camera traps with audio recordings, ecologists can keep their eyes — and ears — on what's going on in the jungle.
Thanks for listening for Scientific American — 60-Second Science. I'm Christopher Intagliata.